Duterte’s name was trending right after his televised address last April 1, 2020 happened. Many popular celebrity burst their emotion towards the president through social media.

Here are some of the twits of the know personality of the Philippines:

She is a Filipina actress, singer/songwriter and television personality She won 2nd Big Placer on Pinoy Big Brother All In. She entered the PBB House at the age of 16 and was dubbed as the “Singing Sunshine of Davao”.

She is a Filipina recording personality. Isidro started as a back-up singer together with her sisters Olive Cruz and Tina Isorena 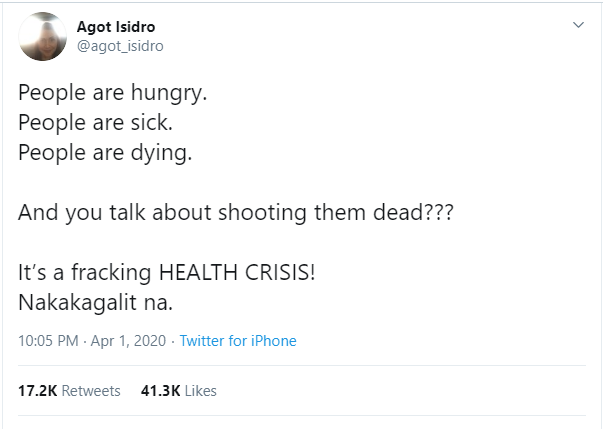 She is a Filipina-American actress.

Duterte’s supporters reacted because they understand why the president mention the phrase “shoot them dead”.

Philippines’ death and confirmed cases increase in the hundreds every day. “It is getting worse. So once again I’m telling you the seriousness of the problem and that you must listen,” Duterte said late on Wednesday.

“My orders to the police and military … if there is trouble and there’s an occasion that they fight back and your lives are in danger, shoot them dead.” Duterte said from his address. “Is that understood? Dead. Instead of causing trouble, I will bury you.” he added.

It doesn’t mean that all will be shoot dead without doing something. The action is for those people who will fight back and cause the lives of police in military in danger. Misinterpretation happened.

Clash happened between two sides. Many supporters of Duterte spoke out and responded the twits of the people who reacted. The pro Duterte  emphasized the statement.. “if there is trouble and there’s an occasion that they fight back and your lives are in danger, shoot them dead”. Most importantly, they want to say that no one will be shoot to death when everyone follow instructions

Despite of the explanation, Duterte was criticized and “Oust Duterte” issue came out.